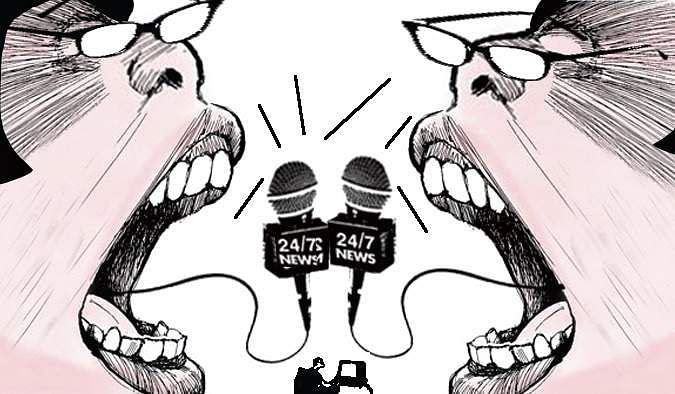 The medium is now more malarkey than message; a conduit of discord, disorder and dementia. For the past few months, media mashers have been flinging more vitriol at Indian news organisations than at politicians, criminals and sundry lawbreakers. The “dog doesn’t bite dog” principle no longer holds. The disparaging monikers flying thick and fast can stupefy the most ardent synonym seeker—paid media, biased media, sponsored media, sycophantic media and agenda-driven media. The press is not facing the ire of just its traditional adversaries, it’s under siege from within.


As news organisations place bottom lines and valuations above bylines and validity of news in dictating the nature of content, media personalities are at war with one another. Last week, prominent English news channels were battling over the TRP ratings of a newly launched channel, which shook the smug supremacy of the high and mighty with disruptive marketing techniques. Their confrontation was not over the quality or credibility of content. The veterans accused the new arrival of manipulating viewership figures by violating established legal procedures. The histrionics, normally reserved by the brotherhood of bytes for lawbreakers, was unleashed against their own brethren. The battle for dominance is no longer between the press and politics, but is a series of skirmishes aimed at creating artificial readership and viewership to attract more revenue than creating credible news. This internecine war could demolish the myth that a good content is king.
Croesus colours content with prejudice and malice. News is no longer the illuminating dissemination of information sans indoctrination; it’s now a commercial quantity hawked using the tricks of the trade for selling other consumer products—faking numbers, hyping quality and manipulating the tools and techniques to eviscerate competition.Numbers are the nemesis of net worth. The Armageddon of Airwaves began last week when the News Broadcasters Association (NBA) accused the upstart Republic TV of using unfair methods to grab TRPs. The NBA asked the Telecom Regulatory Authority of India (TRAI) to intervene. It also approached the Broadcast Audience Research Council (BARC) to hold the release of the new channel’s viewership data for illegally listing itself under multiple genres across cable distribution networks. But BARC defied the NBA, declaring the new kid on the block a clear winner by miles ahead of established news channels such as Times Now, NDTV, India Today, CNN-News18. If Republic TV’s figures are correct, it has created history in TV journalism by beating all its rivals in its first week of launch. Unnerved by its spectacular success, its rivals have decided to quit BARC.However, the gruesome glove game is not confined to the electronic media. Earlier in 2014, the dispute over the findings of the Indian Readership Survey, by the Readership Studies Council of India and Media Research Users’ Council (MRUC), became serious when several Indian Newspaper Society members met in New Delhi to demand its withdrawal within 24 hours. Interestingly, both BARC and MRUC are owned by media companies and advertising agencies. Both stand accused of favouring some of their own powerful members by manipulating field research. In this tragedy of transparency, nobody’s linen is clean; Republic TV mysteriously acquired more viewership in Tamil Nadu by exceeding its distribution target. Manipulation fathers media mirages; a certain survey showed a particular newspaper had zero readership in a state where it publishes three editions.It is evident that it’s not just news organisations, which are plagued with eroding credibility; so is content. Both BARC and MRUC have failed to offer plausible, fair methods of numerating viewership. The buzz in the industry circles is that the biased choices of advertising and marketing agencies, that collect data for BARC and MRUC, are responsible for the skewed findings. With a rising number of newspapers and TV channels flooding the market disproportionately to shrinking or static advertising budgets, the fight for the largest ad pie has blown the thermostat. Hence, a substantial part of news coverage is dictated by revenue considerations over quality parameters.Until a couple of decades ago, trustworthy content grabbed the largest mindshare. Even newspapers and magazines with small circulations attracted ads inspired by their credibility. Readers were willing to pay for quality content. But once a media baron decided to offer newspapers almost free, the entire economics and ethics of journalism went into a sinister spiral.For the past three decades, newspapers are being sold at less than one-tenth of their production costs. With the advent of over 300 news channels, the viewer gets free access to views and news. The current malaise in the media stems from the reality that the consumer is getting content at highly subsided rates or almost free. In their race for profit and burdened by a highly paid top-heavy management, India’s news outfits are dependent on the government and many dubious income sources to survive. Such revenue come with strings attached.
There were always holy cows in the news industry. Once owners and editors accepted short-term pain for long-term gain. Today the major threat to credibility is from media companies opting for short-term gain without realising that this perilous path will lead to long-term lethal pain. The desire for better access to the establishment or a horror of straining relations with advertisers is the driving principle behind choosing news for print or broadcast. Media owners and agents trot out fake numbers to impress and convince spenders and distributors about their reach without realising that genuine political leaders and credible corporates do not need them to expand their market share.
For example, Prime Minister Narendra Modi doesn’t need sycophantic debates, tilted news and craven columns to maintain his credibility. He is not a leader moved by the choice of panelists and columnists since he is the one dictating the news agenda with innovative governance. Yet, the media unabashedly engages in competitive sycophancy to attract his attention. The four ingredients of a healthy communication network are Content, Credibility, Conviction and Clarity. Unfortunately, in the indiscriminate pursuit of numbers, the media is composing its own elegy instead of scripting the obituary of those who threaten its independence and objectivity.

Connect with The Most Trusted BULKSMS Provider in India. Attractive Price with Guarantee 100% Delivery. Call: 9907922122

I am Alex Spikes