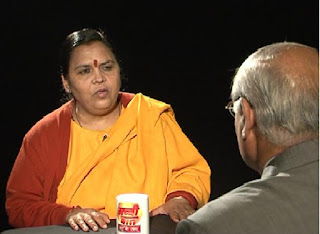 BJP offered to take me back, admits Uma Bharti
Firebrand sanyasin Uma Bharti has asked UPA chairperson Sonia Gandhi to prove herself to be a swadeshi by bringing back black money stashed away in foreign banks. She said the country would be indebted to the NehruGandhi family if the money were brought back.
In an interview based programme Sachchi Baat with me on the ETV network, Uma Bharti, for the first time, revealed that she was approached by BJP president Nitin Gadkari to return to the party and was assured of a post of an officebearer. It was decided that Gadkari would consult party leaders before taking the call. Later, when he met her last July, it was agreed upon that she would return a year later.
Asked why she had sought a year's time, Uma Bharti said she was more keen to take up issues of public importance from an apolitical forum to have a greater impact. She admitted that her views on the Women's Reservation Bill were different from those of the BJP, which has been opposing a subquota in it.
On the controversy of alleged terrorist links of Sangh activists, the sadhvi termed it as a "conspiracy" of the Congressled UPA government to malign the RSS. Giving the example of Communists, she said just as some extremists among them had turned Naxals, some Sangh activists might have gone astray. She argued that the Sangh could not be blamed for terrorist activities. She stressed that the Sangh was capable and competent to defend itself and that the BJP derived its strength from it.

Uma Bharti, however, refused to be drawn into a debate on the absence of a prime ministerial candidate in the BJP, saying there were over three years left for elections.
Video Part -1; Part -2
Posted by Prabhu Chawla at 1:22 PM 1 comment:

The hypocrisy of outrage
The pot is calling the kettle black. As the UPA-II makes uncouth attempts to bring black money back home, it is being targeted by multiple pressure groups — the majority of which are perhaps the most fecund sources of capital flight. Sensing the apparent weakness in its will to govern, some prominent corporate leaders recently launched a scathing attack on the government for its failure to handle corruption. For the first time in independent India, a cabal of the high and mighty has taken advantage of a polity reeling under multicrore scams to project the institution of Corporate India as the only hope for cleansing the system. I admire their intent but not their intention. The nation — quite rightly — believes that the corporate sector is as responsible as the politicians for the current corruption epidemic. History has shown that illicit political wealth arises from partisan decisions made to benefit big business. So, it is only right to expect our holier-than-thou corporate leaders to voluntarily offer the scrutiny of their foreign accounts and investments, as well as FII’s contributions in the various companies owned by their fraternity members.
There is a latent irony in the open letter written by a group of prominent business personalities — Azim Premji, Keshub Mahindra, Deepak Parekh, Jamshyd Godrej, Prof M Narasimham, Yezdi Malegam, Anu Aga, Dr A Vaidyanathan, Bimal Jalan, N Vaghul, Nachiket Mor, and Dr Ashok Ganguly — demanding that the government curb the misuse of its discretionary powers by “dealing determinedly with governance and aggressively against corruption, while openly debating these issues by elected legislators is the only means left to reassure our citizens”.
Great sermon for a scandal-ridden government, indeed. But can any one of these leading lights of industry or their representatives vouch that they have never been beneficiaries of the government’s discretionary p 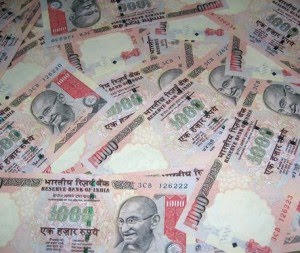 owers? Can they proclaim in all honesty that they have never bribed pliant politicians and civil servants? I doubt it.
Many signatories to the letter have been prominent members of various policy-making bodies in various governments. Some even ran the nation’s banking system and must have been privy to the flight of Indian money abroad as well as its infiltration back in other guises. Why didn’t they make a fuss then, and suggest remedial measures to plug the loopholes? Instead, many luminaries of India Inc have been tirelessly campaigning for liberalising rules in order to attract Foreign Direct Investment from unknown sources. While there is no denying that some of the epistolaries have done the country proud by contributing significantly to India’s growth story, most have been keeping a cryptic silence over India Inc’s failure to distance itself from political and bureaucratic corruption.

Most new business ventures today are started with funds from tax havens arriving through circuitous routes, noticeable examples being some Indian Premier League teams, green field power and other infrastructure projects. It would be naïve to assume political lethargy as the reason for the delay of decades in signing tax evasion treaties with other countries. Even BJP’s stand on this issue is suspect — the NDA government dragged its feet on enforcing transparency in foreign funding; even now the party is unwilling to take on the government on this matter. After all, the pursuit of power is expensive; political parties spend more than Rs 10,000 crore in each Lok Sabha election. Party accounts submitted annually to the Election Commission doesn’t reflect even a fraction of the actual spend. It is a tragedy that conviction has become a matter of convenience for both political parties and Indiacorp.

A direct and obvious connection exists between the vast amounts of money stashed abroad and India’s supersonic economic growth since 1994. The figures tell the story. In 20 years — 1988 to 2008 — India’s trade balance has soared from $8.6 billion to $69.5 billion. Creative accounting is the conjurer here, enabling illicit fortunes to be concealed in trade balance figures — an eight-fold rise in black money generation. Contradicting conventional wisdom that economic reform lowers corruption, the load of “dirty money” on the economy has been increasing since the liberalisation process was begun by Dr Manmohan Singh in 1991. India’s exports between 1988 and 2008 have grown 15 fold and imports, 13 fold. Correspondingly, illicit foreign deposits also multiplied around 15 fold, as estimated by US think-tanks. Today, corporate India is only bemoaning a mess of its own creation. India is the only country in which the market cap of a couple of corporates is almost one fourth of the nation’s GDP — no other developed nation on earth has acquired such a distinction.

India is also, perhaps the only country in the world which does not tax capital gains. This generous fiscal concession allows investors to make gargantuan amounts of money by playing the markets. According to unofficial estimates, over 500 individuals and corporate entities earned between Rs 10 crore and over Rs 1,000 crore by offloading their shares in their own companies or trading these on the stock market. Taking advantage of liberal government policy, most successful and indigenously promoted banks like HDFC and ICICI have quietly become foreign-owned Indian banks. How and when this happened remains a mystery. Though rules say foreign banks cannot even open new branches without the RBI’s prior approval, Indian shareholders of both HDFC and ICICI were allowed to encash their blue chip shares after their banks were acquired by nameless foreign owners. Did those who sold shares to foreign investors pay tax on the fortunes they made? No. The beauty of the deal is that technically, nothing illegal happened. Instead, wealthy corporates were able to pressure the government to liberalise rules in order to own dream houses and assets abroad quite legally.

Of course, Indians should be allowed to take over big companies abroad, build mansions and own mega yachts while establishing economic supremacy over the world. But let the nation be assured that its citizens are getting goods and services which haven’t been imported through over-invoicing. Ask any agent dealing in the import of foreign goods, and he will tell you how Indian companies including PSUs import various commodities at inflated prices; on an average, each deal has a 10 to 15 per cent mark-up. If that be the case, about Rs 40,000 crore is deposited in foreign banks annually by Indians. If industry means business, all its members must make an unconditional declaration that no illegal foreign accounts are held in their names. They should offer unconditional authority to investigate any seemingly suspicious deposits as well. Such charitable honesty doesn’t seem forthcoming; both the government and our corporate leaders are deafeningly silent on the issue of making public, the names of individuals who own undisclosed foreign accounts. The nation expects visible deeds and not just self-righteous letters. As the number of Indians living below the poverty line grows, our neo-capitalists will not be justified in blaming the common man for taking socialist cudgels on behalf of have-nots waging war for social control over wealth and assets all over again.
Posted by Prabhu Chawla at 3:43 PM No comments: