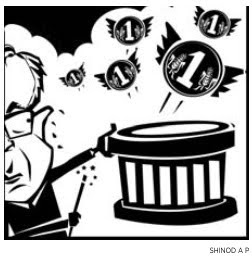 Beg, borrow and spiel
As an agile 76-year old Union finance minister rose to present his third consecutive budget in Parliament on Monday morning, his party, the markets, India Inc and the Opposition were all expecting tall promises from the 5 ft 2 inches Pranab Mukherjee, including drastic changes in structural and ideological directions. After all, in 1982, Pranab at 47 was the youngest ever finance minister to present a full fledged budget; Indira Gandhi complimented him for being the shortest finance minister to give the biggest ideas. His predecessors like P Chidambaram and Yashwant Sinha are known for offering innovative ideas laced with market-friendly jargon. They presented Dream and Super Budgets. However, Pranabda’s budget reflects neither dream nor direction. After making the longest ever speech made by a finance minister — 13,889 words for over two hours — Pranab left no one in doubt that he wasn’t a liberal parent who intends to leave behind gigantic, productive assets and huge savings for his successors or inheritors to walk laughing all the way to the bank. His budget is very small on big ideas and very big on small ideas.

The finance minister has made it very clear that at the sunset stage in his political life, he isn’t ready to take risks or make compromises with his brand of politics. In deference to the wishes of his command, Pranab decided to indulge in a spending spree but refused to raise money by imposing extra burdens on anyone. He has treated both a labourer who gets Rs 120 per day through the Mahatma Gandhi National Rural Employment Guarantee Scheme (MNREGS) and a corporate caliph who earns a dividend of Rs 12 lakh per day on the same footing; he hasn’t disturbed the take-home-income of either. But he had to face the problem of raising money to meet rising expenditure on various social schemes. So, Pranabda decided to follow an old saying: “Increase expenses, income will automatically come from somewhere.” For the finance minister his budget was meant to provide freebies to the election bound states of Assam, West Bengal, Tamil Nadu and Kerala. All the four states have been given special elections as the Congress expects to win two from the Marxists and retain the other two at any cost.

Prime Minister Manmohan Singh who once worked under Pranab as finance minister may have changed his views on the economics of politics. Pranabda’s politics of economics is consistent and hasn’t changed much. Budget 2011 reflects his core ideology — a Budget by the Congress, of the Congress and for the Congress — let’s borrow more to spend more. The finance minister simply refused to earn more.

During the past six years of the UPA government national debt has risen by over 100 per cent from Rs 2 lakh-crore in 2004 to over Rs 4 lakh-crore today. For a population of over 1.1 billion, this means a debt of over Rs 32,000 per Indian. The government paid Rs 2.13 lakh as interest during 2009-2010 and will end up forking out around Rs 2.67 lakh-crore during the next fiscal year. If money was being borrowed to create tangible productive assets and generate employment, the nation would have forgiven the finance minister for leading the country towards bankruptcy. Even government statistics foretell a doom story. While the number of those living below the poverty line has gone up, the number of those looking for gainful employment is rising at a rate faster than the country’s population growth. If the UPA continues to practise its current philosophy of profligacy, it will leave behind a non-productive and poor Bharat inhabited by a few hundred wealthy Indians who eventually own India.

While Pranabda is not willing to withdraw the subsidy on foodgrains, kerosene and diesel to retain his socialist image he has bitten the pro-rich bullet of phasing it out. In a move that will hit the middle class hard, the finance minister has declared that BPL families would be given a cash subsidy on kerosene oil etc, from 2012; which means the middle class will end up picking up the tab for their cooking gas and other subsidised products. It is puzzling that the finance minister found it socially correct to forego customs revenue of Rs 615 crore from the import of dairy products and another Rs 285 crore from importing footwear for the rich and mighty. But such figures seem tiny when the budget justifies over `4 lakh-crore as revenue foregone by granting both direct and indirect taxes to the corporate sector. In fact, a detailed scrutiny of Budget 2011 reveals that Pranabda was persuaded not to increase the tax burden of those sectors that are accused of absorbing and generating the maximum black money. Actual tax incidence on property developers is just 19 per cent, on builders 22 per cent, diamond cutting 20 per cent and on realty agents 20.3 per cent as against 30.5 per cent for poor retailers.

When trade unions raise a hue and cry to take PF interest rates north, corporate-sponsored reformers scream foul. They forget that the total interest payment on PF and other small savings is only Rs 20,000 crore as against Rs 2 lakh-crore which the government gives as interest on market borrowing. Check this out: Indian billionaires whose net worth is over Rs 222 billion will pay the princely sum of Rs 603 crore as wealth tax and zero capital gains tax.

Pranabda has also avoided cutting costs and reducing the size of the government. His three budgets have added over two dozen committees, commissions and panels; most of their members enjoy either Cabinet minister or minister of state status, or at least that of a secretary to the Union government. There are more people holding ministerial rank outside the government than within. Obviously Pranab’s mission and motto is to retain jobs for me-and-mine and distribute dole to those who help him to stay in power. No wonder our erudite finance minister spared only politicians and bureaucrats for providing ‘essential services’ while imposing service tax even on hospitals in which heart surgery is carried out in air-conditioned operation theatres. mailto:prabhuchawla@expressbuzz.com
Posted by Prabhu Chawla at 10:00 AM No comments: