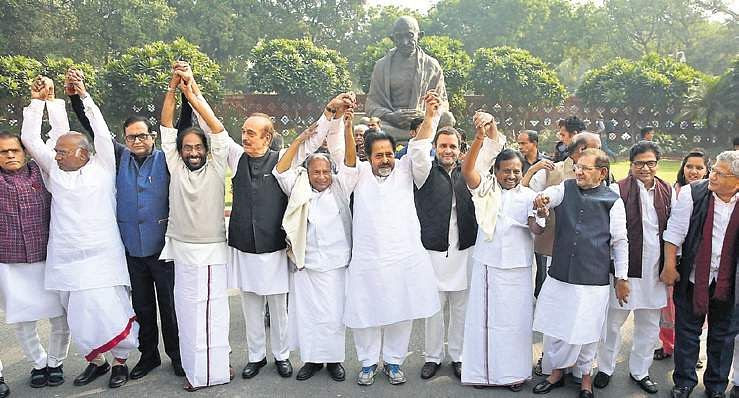 Opposition leaders
Something is rotten in the state of the Opposition. The stench of failure pervades its decaying leadership, which is powerless to resist the Surge of Saffron at a time when India needs credible and saleable alternatives. Desperation leads to deliberation; conflicts of ideologies or alternatives among anti-Modi forces have been packed away with the hope that a joint presidential candidate will emerge from the parleys precluding partisanship. As their satraps crisscross the country searching for the elusive grail of unity, skeletons of graft and nepotism are tumbling out of their cupboards with unending regularity. There is hardly a non-BJP leader not plagued by scams and revolts.


Opposition parties are unable to keep their flock together, their rank and file falling prey to the allurements of the ruling establishment. They are unsuccessful in halting the Modi juggernaut in their states. Moreover, India is yet to become a nursery of newbies, where emergent leaders like Emmanuel Macron, Marine Le Pen and Theresa May are incubated to replace the existing leadership and shake up the system. Like the lotus eaters, the Opposition’s deluded dream of becoming roadblocks in Prime Minister Narendra Modi’s pursuit of a second term in 2019 is in limbo.

● Arvind Kejriwal was considered Mr Clean and Able until former ministers accused him of financial irregularities and nepotism in government contracts. Over half a dozen AAP legislators are facing corruption charges and criminal cases; others are being investigated by agencies. A colleague accused the chief minister himself of accepting cash for favours (denied later). The party itself is being probed for fudging accounts.
Kejriwal is facing large-scale desertions—even leaders once considered his close allies are bidding adieu in a hurry, holding him responsible for the drift. Kejriwal is no more seen as a leader with an alternative agenda for governance based on transparency and democratic functioning. The leader, who created history in Delhi by winning 67 of 70 seats, acquired opposition party status in Parliament by trouncing the SAD-BJP power alliance in Punjab and came second in municipal elections, has been reduced to a political pariah. Until recently Kejriwal was being romanced by most non-BJP CMs; West Bengal’s Mamata Banerjee and Bihar’s Nitish Kumar wouldn’t miss an opportunity to visit him when they were in Delhi. The demagogue, who once drew massive crowds wherever he went, is losing the ‘g’ in his gloss.

● Mamata Banerjee, the ‘Tigress’ of West Bengal, is being eroded within. Over a dozen TMC ministers and MPs are either in jail or under investigation. Hardly a day passes without the CBI, Enforcement Directorate or Income Tax come knocking on the door of party leaders or office-bearers. BJP boss Amit Shah’s next target is West Bengal; he has vowed the saffron flag will flutter atop Writers’ Building. Though dissent is not visible in the TMC yet, Mamata’s cadres doubt her ability for a hat-trick. The Bengali middle class, which catalyses her victory and acceptability, is disenchanted over her administrative skills or leadership quality. Mamata’s grip over the minorities and weaker sections in the state is intact but she has been forced into assuming a strident pro-minority stance, which works in the BJP’s favour. Her major concern appears to be her failure to attract disenchanted leaders from other parties or add new cadres to her stagnant stock.

● Lalu Yadav sprang a surprise in 2015 by not only winning the largest number of seats in the Bihar Assembly polls but also by inflicting the first electoral bruise on the invincible Modi-Shah duo. Since he was legally banned from joining the government, he got two of his sons important positions in the Nitish Kumar government. Now, the media expose about his family’s questionable land dealings in Bihar and Delhi have dented his manoeuvrability in influencing the political agenda both at the state and central level. So far, he has contained any revolt in his  Rashtriya Janata Dal but the BJP is exploiting the negative fallout of the scandal, hell bent on breaking the JD(U)-RJD alliance and repeating its 2019 Lok Sabha sweep.

● Mayawati and Akhilesh Yadav, who ruled Uttar Pradesh for over a decade, face massive revolts both from party leaders and family members. Theoretically, by combining with the Congress, they can prevent the BJP from winning half the 73 Lok Sabha seats it bagged in 2014. In the May Assembly elections, their combined vote share was much higher than the BJP, which won a record 326 seats. Mayawati, reeling under corruption charges, is helpless to prevent many leaders who helped her win in 2007 from leaving. Meanwhile, Akhilesh is under constant threat from father Mulayam Singh and uncle Shiv Pal.

● Naveen Patnaik, the unstoppable Odisha Chief Minister, is under tremendous pressure from within after the BJD’s unsatisfactory performance in local body elections. Many former followers have been speaking against him. Some of his MPs and MLAs are under investigation for economic offences. Naveen had created a state record in 2014 by capturing 20 of 21 Lok Sabha seats despite Modi’s nationwide popularity.

● Jayalalithaa’s death has weakened AIADMK so much that its survival depends more on the magnanimity of Modi Sarkar and less on its current leadership. Many of its leaders are involved in criminal cases.
The Communists who rule Kerala and Tripura are not positioned to lead the Opposition either; ideological contradictions make them unacceptable to regional rulers.

The BJP cannot take the entire credit for the combined anti-Modi conglomeration being leaderless and directionless. Modi baiters have to own up to the responsibility for their failure to serve as constructive checks on the Centre.

The ruling party will use every trick in the trade to dismantle and discredit its opponents. But it is the responsibility of the Opposition to anticipate and tackle turbulent air pockets well in advance. The BJP has broken their opponents with both carrots and sticks. In response, its foes have failed to keep their flag flying with credible criticism of the government. While Modi coins and creates seductive slogans and scenarios on a daily basis, his opponents cannot generate equally compelling narratives. Rushing around like headless chickens, Opposition leaders expect Modi to slip, toppled by the excessive weight of promises. In democracy, power flows from ballot boxes. But Modi baiters are hardly prepared for the battle of ballots.

Email ThisBlogThis!Share to TwitterShare to FacebookShare to Pinterest
Labels: The Opposition