Money multipliers survive by promoting the belief that good economics is bad politics. Now Lobbyists for Cuckoo Liberalism are hawking the slogan that good religion is bad economics and worse politics. They conveniently shy away from mentioning the negative aspects of those religions, which are pushing numerous countries back to the Stone Age and into the maw of terror. Stunned by the mass acceptability of nationalism and welfarism, status quoist illiberals are projecting the rise of Hindutva as a major threat to development. During the past three years, Prime Minister Narendra Modi has proved beyond doubt that the symbols, songs and syntax of faith make real Vikas Mantras. Saffron is no longer the colour of communalism. 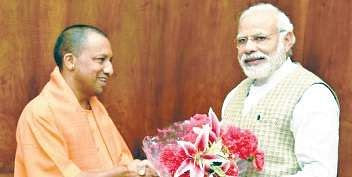 Ever since Modi anointed Yogi Adityanath as the Chief Minister of Uttar Pradesh, the Cassandras of communal connivance are on hyperdrive to eviscerate social and ideological concepts and configurations that remotely resemble Hindutva. They have chosen to be selectively vocal against religion. They prefer not to acknowledge that Yogi, during his three weeks in office, has taken many decisions empowering the minorities and women, enforced law and order, tamed corruption, improved infrastructure and ensured continuity rather than embarking on actions to embolden hard core communal outfits.
The distortion of the ban on illegal abattoirs and brutal attacks on meat shops by fringe elements did spread fear among the minorities. However, course correction by the unflappable Yogi has made it clear that inclusive administration and not political Hindutva is his raj dharma. It shows the sanguine sanyasi hasn’t deviated an inch from the Modi Model of governance and development. All the 13 BJP Chief Ministers, too, have tried to keep their distance from fringe elements.
Taking a dvaitik cue from Modi methodology, they wear religion on their sleeves while ensuring good governance. Most BJP-run states perform better on numerous economic parameters than their adversaries.

Despite the stressed international economic environment, India’s economic performance in many sectors has been better than the world’s best. Motivated by Moditva, many neo-believers are inspired by the epiphany that a nationalist makes a better ruler than a leader who follows radical religion or La-La Liberalism. Today, three heads of states—Xi Jinping, President of China, Shinzo Abe, Prime Minister of Japan, and Modi—have placed their flag and country above all. Donald Trump won the presidency seeking a mandate for America.


In Europe, nationalism is the new liberalism. Many mass leaders have come to the conclusion that nationalism subtly tempered with religion ensures peace and prosperity, empowered by self-belief. This is a slap in the ugly face of Islamic fundamentalism in West Asia, which is infecting the civilized world through senseless lone wolf attacks and bombings.
Modi’s successful nationalism appears to be a heady mix of religion and economics. He feels Ram rajya represents the best model of economic growth where accountability, transparency and equality decide the contours and culture of governance. Modi has rescued many castaway icons of nationalism, social reforms and the Independence movement from abandoned islands of political partiality.