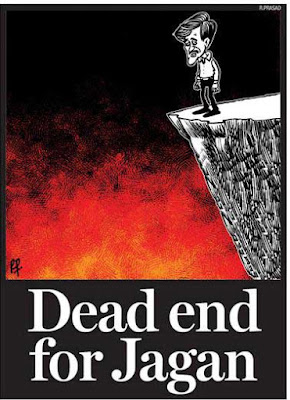 THIS Friday marks the first death anniversary of Andhra Pradesh’s charismatic chief minister Y. S. Rajasekhara Reddy. It will also mark one year of grandstanding by Y. S. Jaganmohan Reddy, YSR’s 37- year- old son and Lok Sabha MP. A year ago, the Congress was faced with the prospects of a serious revolt in the ranks in Andhra Pradesh when Jagan staged serial dramas to stake his claim to succeed his father even before YSR’s last rites had been performed.
A year later, nothing has changed. If anything, Jagan has become more ambitious and more reckless. Now matters are set to reach a climax and don’t be surprised if a few months from now, Jagan is left with nothing but a severe hangover.
For a year now, the young man in a hurry has been indulging in activities that would have got anyone else the boot. He began by promoting YSR loyalist MLAs to ignore K. Rosaiah, the soft spoken 77- year- old new chief minister. Jagan instigated ministers, many of whom were YSR loyalists, to boycott cabinet meetings.
He also used his considerable money and media power to project himself as the only alternative. If all this were not enough to tax the Congress high command’s patience, the proverbial last straw was his decision to embark on the controversial “ Odarpu” ( remembrance) yatra across the state to commiserate with, and compensate, those who “ committed suicide” after YSR’s death.
He set out on the yatra ignoring even a plea from Sonia Gandhi. She had called him to Delhi and he met her accompanied by his mother and sister. She tried to dissuade him from the yatra and instead suggested that a function be held where family members of all those who took their lives be invited and handed compensation. A stubborn Jagan rejected her plea.
Worse, after the meeting which was supposedly private, he released a statement saying the yatra was an “ emotional” issue for his family. “ We explained to her ( Sonia) the need for the yatra to console the family

members of those who died following the death of my father. She did not cite any specific reason but did not appear to be favourably inclined,” Jagan said in his statement.
The high command was livid. “ All loyal Congressmen must necessarily observe the party dharma and laxman rekha of propriety and party discipline,” party spokesperson Abhishek Manu Singhvi said, adding that the party would not hesitate to take a firm stand to crack down on indiscipline.
From the flurry of activity, both in the government and the party, it appears that this was no empty threat. The Congress K. Rosaiah may finally be readying to wield the axe. A recent secret note from an Andhra Congress MP, an ex- YSR groupie, to Sonia Gandhi recommends that the damage will be minimal and containable if action was taken against Jagan.
The note also says that far from being spontaneous, the yatra is a politically motivated gimmick where even grief is well choreographed.
Though the number of persons who committed suicide last year was said to run into hundreds, it appears now that it is considerably less, perhaps a few dozen. The MP’s note echoes the inputs that the Congress has got from state party chief, D. Srinivas.
Last Thursday, governor ESL Narasimhan flew to the Capital and met the Prime Minister.
Though the ostensible reason was to brief the Centre on developments relating to Telengana, the governor is understood to have given a lowdown on the Jagan factor.
This week, chief minister Rosaiah will also be in town. Jagan’s supporters say his yatra is aimed at strengthening the Congress in the manner that Rahul Gandhi’s yatras into the hinterlands have revitalised the party in areas where it had been written off.
They point out that it was a similar bicycle yatra that YSR undertook in 2004 that led to the Congress unseating the TDP in the assembly elections held that year.
Andhra Pradesh’s importance in the Congress’s scheme of things cannot be overstated. But for its 33 MPs, the UPA may not have come to power for a second consecutive term.
Its hopes of a repeat in 2014 depends to a large extent on how Andhra Pradesh votes.
The dilemma facing the Congress is: do we do it with or without Jagan. At the moment, only one thing is clear. Sonia Gandhi, who hasn’t lost an intra- party war since taking over as the Congress chief, is not likely to surrender to a greenhorn.
Posted by Prabhu Chawla at 10:00 AM