FIRST-PERSON ACCOUNT
The night Mumbai turned into a ghost town
It's probably fate, but once again I found myself at the wrong place but at the right time. On Wednesday evening, I landed in Mumbai for a recording of my weekly show Seedhi Baat for Aaj Tak news channel. I am not much of a foodie and prefer my Dal Bhindi. But some close friends insisted on taking me to a dinner at the Pure restaurant of Taj Lands End Hotel. We finished our meal and topped it up with some wine when the waiter came and asked my friends whether they were heading back towards South Mumbai. I asked him what the problem was, and to my horror he told me that terrorists had taken over the Taj and Oberoi hotels.
The reporter in me wanted to rush to the spot. I rang up my colleagues at India Today. Our bureau chief was on her way home, another colleague was struck in a traffic jam. I looked out to see barricades coming up around the hotel and all vehicles being stopped at least a quarter mile way. Around midnight, I decided I couldn't afford to miss the action, but the hotel refused to provide us a car. There were three of us and surprisingly, we managed to persuade a taxi to take us on a tour of the city at that hour and on this day.
The drive from Taj Lands End, Bandra, towards Oberoi Hotel, Nariman Point, was the fastest I have had - hardly 20 minutes as opposed to the hour and half that it normally takes. Like New York, this is the City That Never Sleeps. But Mumbai this night was a ghost town. The road outside the Oberoi resembled a war zone. Police Commissioner Hassan Gafoor was leading his team from the front, leaning on his car and d 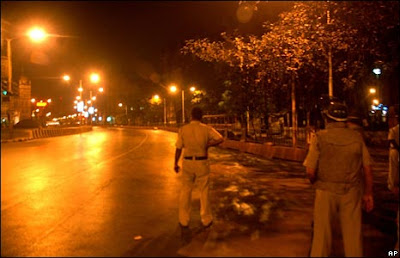 irecting his officials to take positions. A young major from the army in civvies was also giving tips to the police.
The ubiquitous TV crews - over 100 of them - were there, spinning exclusives about every move the brave officers made or were about to make. "Do you journalists know what we are facing?" one of the police officials asked me before getting on with his job. I could sense his anger because the hand grenades that were flung out of the hotel windows were aimed in their direction and not at the huge tribe from the media.
For close to two hours, I stood there watching officers from the army, navy, NSG and local police working like a well-oiled machinery to tackle the situation which we, in our usual cynicism, say they will never be able to. We then moved to the Taj Hotel, Colaba, where the situation was much more grave. There were guests, wailing and shrieking, trying to get out of the hotel. Some escaped, the less fortunate ones were trapped inside. Senior executives from a sister hotel came around to offer help and move them.
All the while, I could hear the exchange of fire and from my vantage point see the secret movement of forces behind the walls of this 150-year-old majestic edifice, which has withstood many storms but now faced the real threat of being reduced to ashes by a handful of terrorists who had carefully chosen the Taj and the Oberoi, the twin towers of India's own economic might.
Back at the Oberoi, we were dismayed to find that Gafoor and his team had not met with any success. The terrorists were still in full control. At 6 in the morning, I saw a motor cavalcade - not less than 25 cars with full commando shield - whizzing past and was told it was Chief Minister Vilasrao Deshmukh and his cabinet colleagues doing a race.
Mediapersons waved hands and shouted but the cars just sped by. In normal times, the VVIPs would have stopped to give the media biting bytes about an opponent. But this time, the opponent was deadly and they were too scared to talk. Or they knew they had no answers to the many questions. As Deshmukh headed home, I got back into my taxi to go back to the hotel. On the roads of Maximum City, there was not a soul to be seen. Even the petty thugs who roam the streets targetting "outsiders" chose to stay indoors. And even my guest for the show didn't turn up.
Posted by Prabhu Chawla at 5:03 AM

Life of commoners has no value now a days. A blast or two, here and there, seven days of TV footage, politicians and intellectuals screaming at the top of their voice and go back to normalcy till the next blast is an acceptable cycle. I guess the terrorists enjoy the TV shows a lot. For them, it is like replaying the same old comedy movie. Blasts after a few weeks and the show begins again…

A movie named “A Wednesday” had hit the theaters a few days back, unnoticed mostly. It had dealt with this problem and one probable solution. Don’t spare even a single miscreant. VAPORIZE them. No need for trial and waste public money. To hell with Human rights for those who do not care for human life. A few of executions here and there would be enough to inject fear to these cowards. Cowards that’s what they are. Or else they would not have attacked helpless, name less, commoners who only wanted to had a peaceful day.

Time has come… to put and end…
India has long be run by spineless creatures… people who scrap laws like TADA, who fight against Supreme Court order of banning SIMI, who equates Sarabjit and Afzal, who spends more time in changing suits rather than standing by the bereaved.

Time has come… to do “A Wednesday”…

Terrorism in India is but low intensity conflict being indulged by Pakistan to bring India to the negotiating table on Kashmir issue knowing fully well that India is neither going to escalate it into a war, nor is going to negotiate on the Kashmir issue anytime soon.

There are two options with India.

Either accept it as a war and retaliate militarily OR make our defences against terrorism strong enough to neutralize such action in the bud itself, let's not forget that there has been no terrorist attack against USA whatsoever since 11 Sep 2001.

Present internal security arrangement may be adequate for the VIPs, the same assurance has to be for the common citizens as well and this has to begin with the near tectonic shift of the beliefs of our Police forces that their responsibility is only to protect the VIPs and earn points and perks from them, the no-bodies be damned.

..how nice to read your blogs..

thanks for giving some knowledge..