"Mayawati, Modi, Advani more lethal than Bush"
The Samajwadi Party (SP) will contest the forthcoming elections under the leadership of Manmohan Singh, says general secretary Amar Singh.
Q. Why this change of heart—from angry Amar Singh to sweet Amar Singh?
A. There is no political change of heart. We have been constantly wedded to secularism and are firm about our political stance. We wanted to withdraw support but didn’t because we want to keep communalism at bay.
Q. You realised this only recently.
A. In spite of our differences with the Congress, we never withdrew support. I have never abused or attacked anyone, be it political or personal. We have mutually understood that attacking each other without any rhyme or reason will not benefit either of us. There is a convergence of political interest. So we have come together.
Q. In the last UNPA meeting, we saw a united face of the alliance in the morning, but by evening, things had changed.
A. In the meeting, I had endorsed the views expressed by Om Prakash Chautala and said that if need arises, we will meet Congress chief Sonia Gandhi and Prime Minister Manmohan Singh. I also said that Dr A.P.J. Abdul Kalam was the right person to make a statement on the nuclear deal issu 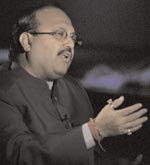 e.
Q. It seems that you are using Dr Kalam’s name for your own convenience. You spoke against the deal on the floor of the House even after Dr Kalam had endorsed the deal in national interest. Isn’t that a volte face?
A. The UPA regime never consulted us, formally or informally. But after M.K. Narayanan approached us, we decided to consult a defence expert. And undoubtedly, Dr Kalam is far more knowledgeable than all of us on this issue.
Q. Earlier, you were misled by Prakash Karat on this issue.
A. I respect him. Their point of view on the Indo-US nuclear deal may be right from their own perspective and ideology. I did support them, but when I met Narayanan, and later our missile man and former president Kalam, we were forced to change our stance.
Q. You were not on talking terms with the Government. Suddenly they get in touch with you and seek support for the deal and you give it. Is this a permanent arrangement?
A. As far as the SP is concerned, we will not do anything to thwart our relations with the Congress leadership, be it at the national level or state level. Whether we will be able to forge an alliance with Congress, we are not too sure. If it happens it is fine, if it doesn’t, still in Rae Bareli and Amethi, we will give unconditional support to Sonia Gandhi and Rahul Gandhi.
Q. But critics say both of you are afraid of Mayawati.
A. Many people are saying that BJP is petrified of Manmohan Singh. Jaswant Singh approached UNPA leaders and asked them to support the BJP to oust the Congress-led Government. Isn’t this what we should call opportunism? If they do, it is politics. If I do it, I am called opportunistic.
read more
Posted by Prabhu Chawla at 7:45 AM