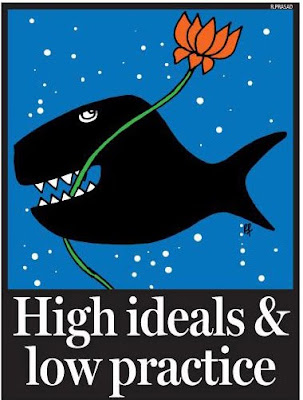 IT WAS once touted as a cadre- based party, bred on iron discipline whose leaders do not compromise on principles. Today, it is at best an uneasy union of various factions, some more powerful than others, but each doing what it thinks is best to serve its own interests while running down the rest. The last fortnight has seen the fissures in the party crop up like never before as the BJP tried to grapple with the twin issues of Rajya Sabha elections and reinduction of two of its talismanic expelled leaders. Neither party president Nitin Gadkari nor senior leaders seemed capable of loosening the stranglehold the powerful clique, the D- 4 as they are called, have had on the party ever since it was voted out of power six years ago.
For more than a month now, there has been talk about the party welcoming back into its fold two of its most charismatic leaders. There are valid reasons why Gadkari and senior leaders like L. K. Advani and Rajnath Singh wanted Jaswant Singh and Uma Bharti back. Jaswant’s homecoming wasn’t a smooth affair, but with Advani determined to bring back the seventerm parliamentarian and former finance and external affairs minister, on whom Advani often falls back on for intellectual inputs and sagacious advice, the D- 4 could do nothing but fall in line.
Uma hasn’t been so lucky. Her proposed reinduction has much to do with the party needing her grassroots connections as the BJP prepares to fight assembly elections later this year in Bihar and in the next couple of years in many cowbelt states. But the opposition to her re- entry from the resident Gang of Four at 11, Ashoka Road, was bolstered by the stiff resistance from Shivraj Chouhan, who succeeded Uma as Madhya Pradesh chief minister. There are reports that Chouhan told the party’s central leaders to take his resignation before reinducting Uma.
What all this makes abundantly clear is that in Uma’s homecoming, the D- 4 sees a threat to the status quo — the power- sharing arrangement allows them to control the party setup both at the Centre and in the states. It is ac 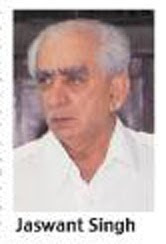 tually a self preservation society at work. From 1998, they have controlled the levers of power, either as ministers in the NDA government and, after being booted out of power, as party officebearers. That their power is not commensurate with their acceptability is evident from the fact that while most of them sweat at the mere Jaswant Singh prospect of fighting a popular election, they have the power to decide who will get tickets to contest polls or even who will be the chief minister.
The opposition to Narendra Modi addressing a JD( U)- BJP joint rally in Patna was not so much from Nitish Kumar as from Friends of Nitish Kumar ( FONK) in the BJP’s central office who are visibly disconcerted at the pan- Indian appeal of the Gujarat chief minister and are unnerved by the prospect of him moving to Delhi.
Greed and self interest rule over everything else but in the process, the party and the NDA coalition that it led are paying a heavy price. In the last six years, the alliance has shrunk beyond recognition. It once had 21 parties glued by the unmatched charisma of Atal Bihari Vajpayee.
Today, there are barely half a dozen. Among those forced out are the National Conference, the DMK, the INLD, the Telugu Desam Party, the MDMK, PMK, the Trinamool Congress, the Lok Janshakti, Ajit Singh’s RLD, to name a few.
Worse, its relations with existing partners are at best tenuous, as exemplified by the recent game of brinksmanship with the JD( U). In the hands of the ruling clique, its future appears bleak. But there may still be some hope left. In the recent Rajya Sabha elections, the old guard was as assertive as could be.
Vasundhara Raje Scindia, whose disdain for Jaswant is no secret, was asked to assemble and keep in isolation the party’s Rajasthan MLAs in the run- up to the elections to the Upper House.
And Venkaiah Naidu, an important cog in the gang that was initially opposed to fielding Ram Jethmalani from Rajasthan, was tasked with being the election manager.
The old guard is finally showing that there is still some fight left in them. And that’s good news for the party and all those who wish it well.
Posted by Prabhu Chawla at 2:39 PM