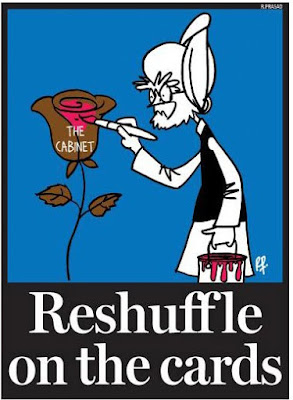 WHAT do you do when things are not going as planned, or worse, show signs of falling apart? Order a cabinet reshuffle. That’s what Sonia Gandhi and Manmohan Singh seem to have decided and I understand that once the current session of Parliament is over, they will order a reconstruction of the Union cabinet to show that there is a lot left in the UPA tank.
By any yardstick, this has been one of the most embarrassing Parliament sessions that the UPA has faced in its second term, where not even one major legislation has been passed. The Sania Mirza saga and the IPL drama have turned out to be blessings in disguise for the government. But for these events, the morning headlines and prime time entertainment after sundown would have been all about the government being mercilessly hauled over the coals. The unexpected reprieve saw Sonia and Manmohan undertaking a review of all the ministers and the functioning of their departments.
Their conclusion, I gather, is summed up in one word: pathetic. In a minority government like the UPA, any reshuffle can involve only ministers belonging to the Congress, since Sonia and Manmohan can barely risk rocking the boat by tossing around ministers from alliance partners like the DMK, Trinamool, NCP and others. M.K.
Alagiri may not come to his office, the Parliament or meetings of the Union cabinet, but his truancy has to be tolerated. Changes must therefore be limited to the Congress. Of the 33 ministers of cabinet rank, 27 are from the Congress, as are six of the seven ministers of dtate with independent charge and 25 of the 37 junior ministers, so there’s lots of scope for chopping.
The rationale for the impending exercise cuts both ways. There are too many ministers who are quite unhappy with their portfolios, while a whole lot of others have plum assignments but don’t have the calibre or the dedication to do justice to their jobs. In the first category fall Ambika Soni, Jaipal Reddy, Subodh Kant Sahay, Ghulam Nabi Azad, Vayalar Ravi, G.K.
Vasan, all of cabinet rank, Dinsha Patel (MoS-Ind) and Harish Rawat, who is one of the senior party men but sadly enough, serves as a minister of state. Then there are ministers like K.H. Muniyappa and Sachin Pilot who are so sti 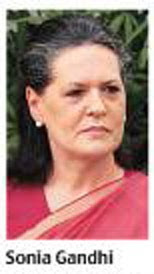 fled, they feel it’s better being jobless than work under the likes of Mamata and A. Raja. The ebullient Ambika Soni who did an admirable job as tourism minister in UPA(I) somehow seems out of sorts in the information and broadcasting ministry and is said to be looking for a change, preferably to the party, where she has already had stints as the AICC general secretary.
Overseas Indian affairs minister Vayalar Ravi, still recovering from a nasty road accident in Liberia, is said to be looking for a less gruelling assignment. At the other end are a handful of ministers on whom the party is likely to wield the axe. Topping the list is Pawan Kumar Bansal from Chandigarh. Otherwise an efficient administrator, it is his misfortune that he is saddled with the parliamentary affairs portfolio at a time when ties between the treasury and opposition benches are at their frostiest. I understand that Bansal will be relocated to the party. The only non- Congressman who is likely to come under the purview of the reshuffle is E. Ahamed, the MoS, railways, who has always kept an eye on his former job at the ministry of external affairs which has now fallen vacant after the exit of Shashi Tharoor.
After its seamless victory in last year’s elections, the UPA has of late begun to resemble a rudderless ship. Ministers like Pranab Mukherkjee, P. Chidambaram, Kapil Sibal, Kamal Nath and Anand Sharma and a few others have brought innovative ideas into administration, but the rest have been like wind- up toys, doing merely what they are programmed to do by their bureaucrats.
Many of the latter are likely to be shifted and who gets what portfolio will depend more on performance in the ministry and implementation of promises made in the UPA manifesto and less on winnability, factional clout or parliamentary histrionics.
Manmohan realises that his government needs a new face and for that he will need many more Pranab da s, Chidambarams and Sibals. From the talent available at his disposal, it is a tough task.
Posted by Prabhu Chawla at 7:55 PM

congress once upon a time having "EK SE BADHKAR EK" leaders.great philosophers educationisrs lawers thinkers came in position that having AKAL of good leaders to become ministers.most of them are backdoor enterors(rajyasabha) they never worked between aam adami common people of india never faced an election they never worked at grassroot level.some of them directly landed on the field of politics and became ministers also (with what qualification god knows).up to the time of Indiraji people in politics were having some connection with freedomsrugle they were knowing the problems of commanman.up to that time policies wre made keeping aamadami in mind.but after that people living in ACs travelling in planes special classes(not in so called cattle class) how can they know in which manner people travel in trains and buses (let them travel in general bogie in any train on any region of india then what will tharoor like ministers call dranage class or shetclass).actually Tharoors Pitrodas monteks vedanta chidamberms sibbals are the face of todays congress.if any leader in congress having potential to lead is only Priyanka neither Soniyamom nor Rahulbhiya ant time will prove it till then suffer with todays manmohini(?) congress