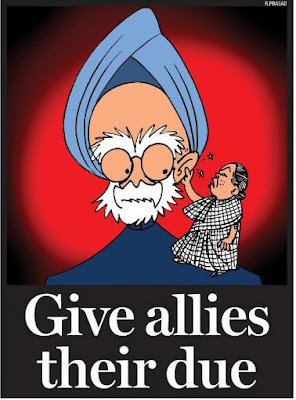 THE MESSAGE to both the Congress and the Prime Minister appears to be stern, loud and clear: your foes are known, now choose your friends. Last week when the railway minister, Mamata Banerjee, directed her 19 MPs, six of them ministers in the UPA government, to avoid sittings of the Lok Sabha and return to their constituencies, she was merely reiterating what she had all along been saying: political friendship is not a one - way street.
With the government appearing to be faltering on several fronts, the Congress will have no option but to reciprocate. And Mamata wants the Congress to respond not by merely handing out a few cabinet berths to her party but standing shoulder to shoulder with her in her ‘ bloody’ battle against the Marxists.
She has made it clear that the MPs from her Trinamool Congress will return to Parliament only if the Centre serves an ultimatum to the Left Front government to improve the law and order situation in West Bengal and refrain from attacking her ministers and cadres.
Her latest ire against the UPA leadership was triggered by violent attacks on Union ministers Mukul Roy and Sultan Ahmed. A senior TMC Lok Sabha member asked me: “ Will the Congress leadership keep quiet if a Congress minister is attacked in Uttar Pradesh or Gujarat? Why hasn’t the Centre sought an explanation from the state government so far?” The Trinamool feels that the Congress is using its allies to stay in power but is not joining the battle of the regional parties against their common enemies in the states. Since her eyes are set on occupying Writers’ Building after the assembly elections that are due next year, Mamata has been mounting pressure on the UPA government to keep a wide distance from the West Bengal government. She is particularly upset with both the Prime Minister, Manmohan Singh, and home minister P. Chidambaram, who, for maintaining cordial relations with the state government, have done nothing more than observe protocol in their dealings with the Buddhadeb Bhattacharjee government. 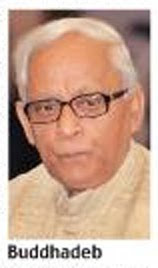 Mamata’s antics after Jyoti Basu’s death last year, which left even her ardent supporters red- faced, were shameful. She boycotted the funeral because she thought Manmohan Singh was getting too close to Buddhadeb when all that happened was that the two stood next to each other at the state funeral for the late leader. Protocol dictates that when the Prime Minister visits a state, the chief minister be present at all public functions. Yet Mamata seemed Buddhadeb convinced that the Prime Minister and the chief minister were hatching something.
What Mamata fails to understand is that in a federal set up such as ours, both the Centre and the state governments have to operate within the Constitutional framework. Mamata nevertheless wants the Modi treatment to be extended to the Marxists too. Shun them, shame them, call them all things vile for their anti- poor policies. She routinely boycotts the visits of senior Congress leaders to the state and even as she stays in the Union cabinet, has been opposing most of the policies of the UPA. So obsessed is she with dislodging the Marxists from Writers Building that she has not attended even 25 per cent of the cabinet meetings held so far. Asked once about her chronic absenteeism, she retorted: “ I am not Delhi- based, am I?” Her habitual absence from cabinet meetings poses no danger to the stability of the UPA. But her defiance could turn out to be ominous for the Manmohan regime. Other UPA allies such as the NCP and the DMK are already upset because they suspect that the Congress is unleashing various central government agencies to keep a tab on them. The NDA and the non- UPA parties in the Lok Sabha have decided to move a cut motion on the Finance Bill during the current session and the Congress will need the collective strength of all its allies to defeat it as well as to ensure the safe passage of important government Bills. True, at this point, none of the allies would want to topple the government.
But Mamata’s posturing has sharpened the debate within the UPA. If the Congress wants the government to be strong, safe and stable, it must lend strength to its allies, give them the feeling that it values their support and will in turn stand by them.
Posted by Prabhu Chawla at 8:40 PM