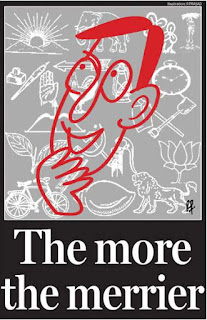 IT IS not the winning but the participation that is important. So goes the Olympic spirit. As the 15th Lok Sabha elections approach, our political class is showing similar symptoms.Candidates of even mainstream national parties are discovering that it is as important to manage your opponent’s campaign as it is to run your own campaign. Never in the 35 years that I have covered politics, quite often from very close quarters, have I seen something quite like this. The reasons are many but primarily, it boils down to this: the two main contender alliances are led by leaders who don’t inspire, slogans that don’t ring a bell and ideologies that are increasingly being blurred. The party structures at the state and the central levels are collapsing and the candidates are mostly left to fend for themselves.
It is almost as if it is not one Lok Sabha election that we will soon witness, but 542 individual elections involving thousands of candidates from the national and regional parties down to powerful local chieftains. It’s a scenario that’s scary for the big players, since in all states, local parties, often raised on caste and other regional considerations, are making huge dents that hurt. Several MPs and candidate hopefuls that

I know now talk not about how to manage their own victory but about joining hands with an enemy to defeat a common enemy.
The logic goes thus: until very recently, the contest in most constituencies was either straight or at worst, a triangular fight. Now most constituencies witness quadrangular or even pentangular contests, and no candidate would dare take another one’s challenge less than seriously.
A young MP, fighting his third parliamentary election, recently summed it up very succinctly for my benefit: “ First I have to manage the local leaders of my alliance. The demographics of my constituency have changed due to delimitation, so I have to study all over again the caste and religion equations.
And with so many candidates from national and state level parties contesting, I have to identify and then befriend the one who will benefit me the most by cutting into my main opponents votes”. Simply put, it all boils down to the “ dummy” candidate. Once considered nothing more than a nuisance in the poll process, he is now an important cog in the electoral wheel. So even “ heavyweight” candidates of national parties seek out powerful local “ enemies” who would join him in defeating a common third enemy. They believe that the more the dummies, the brighter are the chances.
Is it any wonder then that the number of candidates has been steadily on the increase? In the first general election in 1952, there was an average of 3.8 candidates per constituency. It touched 24 in 1996 and is probably a lot more now. And any candidate worth his khadi or khaki will tell you that it takes nothing less than Rs 4 to 5 crore to fight a Lok Sabha election. The plumdog millionaires in the national parties are now matched by wannabe politicians from the regional parties who believe that all it takes to win elections is the right stimulus package which they carry on their campaign tours by the bagfuls.
The new economy has spawned several hundred millionaires. With many regional parties adopting a “ tickets for cash” policy, more it seems is merrier.
Posted by Prabhu Chawla at 10:10 AM

You've hit the right nail at head. I was wondering as to how quietly India is going to general elections this time. Is economic slowdown has taken it's toll in political realm as well ?

Well, in the backdrop of the most electrified elections on the planet, i.e. US Presidential election, general election 2009 in India is an utterly dull affair. If 26/11 carnage and economic mess are the concerns of ruling UPA, waiting NDA too can't boast of anything plausible suggestion/solution put forward by it before the people of India. Do the political leaders/parties in India are so banrupt mentally that they can't even offer to sell something good to people this time ? It's a pity that the oldest party in India, who's ruled the country for more than 50 years has to tell the people that Slumdog's success at Oscars & Chandrayaan's flight are the example of it's better administration than that of NDA. Well, tomorrow we can hear from an erudite spokesman of this "Monarch" that even Arvind Adiga's "enterprenurial" success at Manbooker's Prize is attributable to UPA's "The-White-Tiger-inspiring" rule !

I may sound cyncal in writing this but frankly speaking, sometimes I wonder that democracy in India has become a 'joke' and elections a sort of 'tamasha' for its politicians. And we electorates are kind of 'tamashabeens", who enjoys, clapps and merrily throw our hard-earned money to these madaris as election expenditure. Will be ever pause and think twice before casting our vote that where this "vote" will lead to our beloved country in next five years ? Are we really serious about the problems and hardships that we common Indians are facing in our day-today life ? Do we ever seek the possible and plausible solutions in our franchise the way America did this time ? Do we ever ask our politicians to tell us about a concrete workplan that they have to offer us for next five years of their rule, if voted to power ? It's 60 years now, and we have 60 Crores youths in our country at the moment, when will we dare do this ? If not now, then when ?

Just think over it ?